All I could do was to break the whole thing down and show that it is no longer possible.  -Gerhard Richter

An evolving methodology in contemporary art might be the trend of using one medium to critique the failure or relevance of another. When sculpture relies on photography for its language or successes, then we can conclude a failure of the singularity of media. This also serves as critique of the set of circumstances that allowed for certain types of work to exist as singularities. This new methodology could be called one of alignments, such that neon lights frame a photograph only to obscure it. In the exhibition, Window Smokers, the artists, Jared Haug and Brooks Dierdorff, fabricate the evidences of a panoramic view of terrain and possible altercations of landscape by insinuating the punctuation of one medium by another. This strategy could be described as contrapuntal and adheres to certain ideas invoked by the artist Gerhard Richter, who approached the act of painting a landscape as not an act of representation but as looking at what is to be represented through a glass darkly. It is arguable that this has become in and of itself a strategy. To lift the lid of the scanner in the moment of scan in order to create a photograph by act and action, and then to speak about the form within this photograph as being related in some way to a melting iceberg, is both contrapuntal and darkly meditative. Rather than speaking about the ability of light, through gestural manipulation, to create an angular form that slowly leaks its cause, the act is used to create a representation of the act.

Window Smokers often suggests light and its physical traces, capable of interruption and usurpation. Five framed digital prints are titled according to the actions that created them: “Held Steady,” “Slight Rise,” “Continuous Rise and Fall,” “Rise and Fall, Rise and Fall,” and “Held Steady, Then Lifted.” These images are high contrast abstract compositions that are punctuated by bits of color and graded lines. “Haug and Dierdorff search for nature and representation where the unenclosed can be depicted in its disappearance.” The digital prints made by lifting the lid of a scanner create abstract “photographs” that use light in its burn and retreat as a set of tight compositional constraints. The Photograph is used elsewhere as a representative of or dummy landscape as in “Organizing Principles” or “Late Season Tactics.” 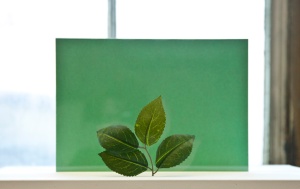 There are times when works of art seem to conspire against the viewer through tense aesthetics and closure. In Window Smokers the artist’s aesthetic language is dexterous and full of material alignments. The works “Transfer” and “Merger” are photograms, evidencing an image created through the trace or positional affectation of a natural element on to a two dimensional surface. “Merger” was created by ice melting and moving food coloring across a sheet of paper—in its rusty streaks it is possible to find the remnants of a thing’s end: winter, ice, light. In the case of “Transfer” fake leaves sit in front of construction paper faded in the area not blocked by the leaves. This is also the case with a series of works in the main gallery space: “Red Heat Tremors 1-7,” “No Mercy Traveling North 1-5,” “Summer Nights Land of Doom 1-3,” and “Vertical Limit Under the Volcano.” These works are landscapes made on light-faded construction paper and though simple create a feeling of the elegiac beauty found in faded photographs of evening landscapes, of night vision palette, paper cut collage, or Luc Tuymans Allo Social Housing. The ambiguity and dexterity of these works is disorienting and, though small in scale, suggest the degrading effects of light and sight—or possibly that the landscape itself is the source of degradation, not of culture or moralities but of being and representation.

In “Twitch” and “Organizing Principles” traction, implied opening, interruption, and the kill are physical maneuvers in time and space where the integrity of one physical body is interrupted by the integrity of another physical body. A block of ballistics gel sits on top of a pedestal and holds a photograph against the wall in “Organizing Principles,” and presents a formally satisfying arrangement. Sculpturally, “Organizing Principles” employs the dynamics and materials of hunting. The ballistics gel that holds the hide (photograph) to the wall looks slightly oily and resembles cast acrylic; the photograph seems to be of animal hair that looks blond, sharp, and damp. The video “Twitch” depicts a deer that has been shot and lies barely twitching in a field of grass. The projector and a thick slab of acrylic, serving as projection screen, lie on the floor and cast a greenish glow in the space. The video is very still, and viewed through the thickness of the acrylic is blurry, suggestive rather than intelligible. The strategies of these two works find their fullest realization in “Late Season Tactics,” in which a large piece of smoked acrylic pierces and folds a digital image of an organ (possibly a heart or liver?) laying on the grass. There is something simple, elegant, and intriguing about this situation. “Late Season Tactics” suggests a forever of open possibilities born of contradictions, and two flat surfaces that provoke a narrative through interruption.

Gerhard Richter has made the claim that to degrade something is to get at its truth, and so contradictions of material and media can be their own narrative and solution. In Window Smokers, the landscape is subjected to and created by physical change. It is this interruption or alteration—in the form of an organ on the grass, of ice or light on paper—that demonstrates the human temporal and the natural as unresolving change.