It has become standardized practice for the walls of an art exhibition space to carry a smooth white finish. In theory, it creates an open space, allows light to wash evenly over the walls. It’s a blank. It’s a way of disappearing.

It’s rare that white walls are even regarded, looked at, or thought about. They are empty.

In THX 1138, the white room is a prison, a void implying an infinite and unbreachable space:

As literal white voids represent some “other realm”—usually a result of a dream or crossing over to another universe—physical rooms that replicate this visual effect will have the same connotations. They make excellent cells for imprisonment or interrogation—the absence of visible exits (or any sign that the outside world exists at all) implies no possibility of escape. (http://tvtropes.org/pmwiki/pmwiki.php/Main/WhiteVoidRoom)

Neo in the Construct, "The Matrix."

The white room in cinema (THX 1138, The Matrix) is also something else: it is the digital. The blank white room of The Construct in The Matrix, where Neo is sent to procure supplies (i.e. firepower) is a depiction of a digitally rendered space, with objects input as necessary. We see this also in the loading sequences of Assassin’s Creed 2, as the protagonist plugs in to a digital VR simulator, and enters a white void that is slowly loaded with a digital representation of renaissance Italy.  The white gallery walls, then, can be read as something more than just a retreating surface. The white walls of the gallery are a blank matrix, awaiting input. They are an un-rendered digital slate.

Or, at least, this is what they begin to signify in the case of Alex Mackin Dolan’s recent exhibition, Pure Clear, at Appendix Project Space, and accompanying documentation images at alexmackindolan.com/pureclear. The sculpture and video-based work on exhibition seems lifted out of a digital rendering program or tumblr photostream, the white walls stand in for the white space of Sketchup or the blank screen of an empty, waiting web-browser. The work is somewhat alienating, aloof, as if it is reluctant to occupy physical space and is simply waiting to be photographed and re-entered into the digital image cloud.

Phagic Growths is a sculptural work incorporating a flat screen television, lying screen-up on a low plinth with a looped video, and several glazed ceramic forms. The video depicts an undulating, black, fluid surface, something reminiscent of the “black oil” in the X-Files mythology. Every few minutes, a line of green sparkles cascades across the screen (similar green sparkles sprinkle out of the mouse cursor when viewing the exhibition on Dolan’s website). Slick black glazed ceramic forms, spiky and globular, rest on the surface of the screen, some of which look to be reaching upwards, out of the screen. An alien parasite, the Venom symbiote, or a digital, black virus.

Much of the work barely seems real, and, especially in the case of Resource Board (four snap-shot sized c-prints of digitally rendered images clipped to a glass message board, with pen drawings), New Tribal Orientation (silk digitally printed with rendered pattern and wrapped around a cylindrical plexiglass form), and, even, Positive Outlook Windspinner (a purchased wind-spinner with various charms and lenticular prints), look like they could, in fact, be computer generated images somehow occupying physical space.

In work that utilizes digital imagery and 3D rendering technologies, which have in recent years become increasingly accessible to artists working outside of the gaming or film industries, there is, often, the danger of simply becoming entranced and enamored with the new-ness of the medium, with the slick finish of the CG object or animation. In a criticism similar to that often levied against the “Finish Fetish” artists of 1960s and ‘70s Los Angeles, there is the possibility, for artist and viewer alike, to allow surface to substitute for substance. 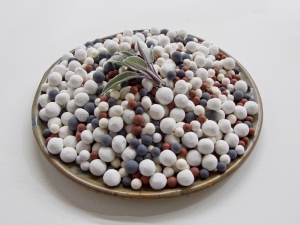 Dolan’s handmade objects still somehow read like holograms pulled from the digital, but the specificity of his material choices counters this, and, along with his titles, offers up a tongue-in-cheek mysticism. Performance Stain, through context and presentation, looks unreal, though its manifestation relies on specific material choices: watercolor on hydrophobic moisture wicking cotton (designed, I think, for athletes, to absorb and hasten the evaporation of perspiration). Long Term Offerings consists of three objects on a low plinth: a plexiglass rod holding a hanging chain of multihued “tribal” rings, a gloved hand holding a nubbed laundry wash ball, cast in pigmented dental plaster, and a glazed ceramic plate piled with tourmaline ceramic balls, a material used in curling irons due to its ability to release negative ions when heated, and a small sprig of sage.

These material choices are hyper-specific, adding layers to the meaning of the objects and a depth to how they occupy space. However, I still can’t shake the feeling that they, in true hyper-Judd-minimalist fashion, don’t want their viewer around. The experience of the work seems almost more complete and whole when viewing images of the work online, mediated by Dolan, the internet, and my iMac. Dolan’s website page for the work is, maybe, a more complete exhibition, or perhaps simply a more refined, edited experience, complete with the titles and materials-list (not present, or at least readily available, at Appendix) and cascading green cursor sparkles.

For Dolan and Pure Clear, the physical world seems secondary, a necessary inconvenience in order to traverse a loop back into the digital, back into the white room.

I am, honestly, unsure what that means, or where that leaves us.