foreGround is an exhibition of six Oregon artists, loosely organized around the theme of geology. A group exhibition, in a perfect scenario, brings together disparate voices, and allows those disparate voices to engage in something of a unified conversation. In this case, curator Jeff Jahn has paneled a discussion that comes off as somewhat forced and uneven. The works presented don’t fully jive with one another, with small missteps interrupting the cadence.

Arcy Douglass presents a series of three untitled paintings, black and white geometric abstractions composed around the grid and ninety-degree arcs (sort of bringing to mind a flat honey-I-shrunk-the-LeWitt experiment). These geometries are counterpoint to Jim Neidhardt’s Atomic Fire Balls I-IV, scribbley expressionistic abstractions in black and salmony-red. Neidhardt’s compositions are generally centered on the page, their forms bringing to mind a campfire or strange carnation, the sometimes-violent nature of the scribble relatively tame and controlled. These drawings are, for some reason, hung with large metal spikes in an over-kill gesture for work that verges on elegance. Matthew Picton gives us Portland, a griddy map-based piece with three dimensional building-type structures made out of, supposedly, promotional materials from the film Dante’s Peak and book covers from Ursula LeGuin’s The Lathe of Heaven. It’s also got smoke on it. 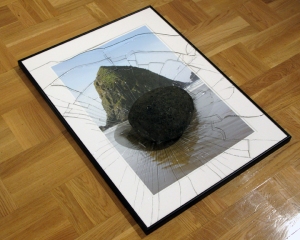 Jacqueline Ehlis, "Holding Through The Silence."

Jacqueline Ehlis gives us another grid on the wall, of little boxes: some holding geological specimens, some backed by mirrors, and square blocky canvases with goopy, dirty-pastel colored paint. This grid is part of the installation of Holding Through the Silence, which also includes a photograph by the late Terry Toedtemeier of Haystack Rock at Cannon Beach, and a photograph of that same rock by Ehlis in a frame on the floor, glass smashed by a big, roundish volcanic-looking rock. We pay our dues and smash our idols, all with a bit of postmodern nonchalance, and give a nod to Smithson and LeVa on the way. The grid of stones and mirrors throws the piece off balance. It doesn’t seem to be a real part of the whole package, but an incongruent aside. 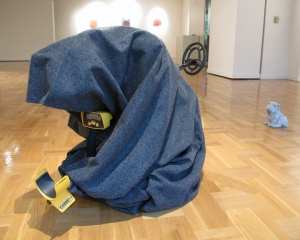 While Ehlis’ broken glass does a little something, the most pointed voices in the conversation of foreGround are found in the sculptures of Ben Young and Zachary Davis, E4 F5 and Rovers, respectively. Young’s work takes for its title a classic opening chess move known as the Duras Gambit or the Fred Defense, in which a black pawn is sacrificed to the white pawn for a later advantage. Young’s work consists of a humanoid form shrouded in Bueysian grey felt, crouched on the floor, seemingly impaled with a new, gleaming metal detector. Nearby is a small cast concrete statue of a lapdog, looking on sheepishly. Despite the impalement and implied pain, the work is scarcely violent. It’s almost as if the figure and tool have been joined together through some sort of matter phasing, the electro-divining rod penetrating the shaman without blood, without tearing and cutting, simply materializing inside its form. Magic slain by electro-magnetism, with the stone pup adding a touch of humor. 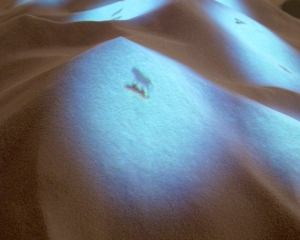 Death, or its spectre, carries through much of the work, present in Neidhardt’s Fire Balls, Picton’s smoky map, Ehlis’s shattered glass elegy, and Zachary Davis’ Rovers. Rovers is composed of a loose dune-scape of white sand atop a low grey plinth, upon which is projected a looping digital video of small, spot lit, scampering critters. These digital animals scavenge across a blasted, desolate landscape, devoid of any evidence of previous life. In the face of geologic time, in the scales of duration that mark the changing body of the Earth, human life and death is largely irrelevant. When humanity blasts itself off of the planet, through fallout or emissions or whatever else, the rocks will still stand, the sand will still blow in the wind. Perhaps all that will remain will be digital projections, creatures composed of data, prowling through the wasteland.

For their October exhibition, Appendix Project Space hosts the Baltimore, Maryland, based artist Geoffrey KixMiller. KixMiller gives us Swimming, an exhibition of sculpture and an associated artist’s book. The work is somewhat enigmatic, flitting between aesthetic models of modernism and the classically post-modern, personal profile web pages and the built urban or suburban environment. 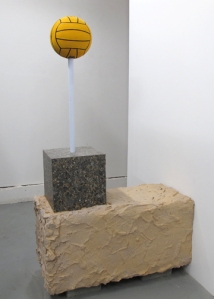 KixMiller presents two floor-standing sculptures, each composed three primary components: a rectangular, stucco base, atop which sits a marble-patterned Formica cube, from which extends a white rod topped with a round or ovoid found object. In the first of these, the stucco base rests horizontally, reclined atop several grey brick supports, with one end against the wall, the white pole rises vertically, and is crowned with a golden-yellow water polo ball. The second of these sculptures stands more or less upright, its stucco base vertically on end, though skewed at a slight angle. The white rod emerging from the Formica cube extends the counter-angle to the base, and hold aloft a shining green watermelon draped with a scrap of camouflage-patterned cloth.

The wall-hung sculptures utilize a similar three-part composition: wheat-pasted pattern (in the first, a green and brown camo pattern, the second, a pink and violet sort of digital static and glop pattern) framing a tacked up, poster-sized, photo print depicting two people in an intimate exchange (the first, and embrace outdoors at night with streetlights in the background, in the second, two young women in a dinner or restaurant leaning close for a kiss or a whisper) with a small shelf and found object (the first, a white vase of white roses, the second, a pineapple) mounted atop the image to obscure the photo-subjects’ faces. 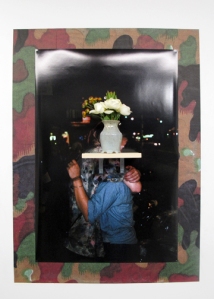 In some sense, each of these works is a variation of one singular work. Once the recipe is established, it seems to be more of an exercise of formal composition and juxtaposition than anything else, and the found objects, images and textures utilized seem to be almost interchangeable. That is to say, a camouflage cube and Formica image frame may not alter the work a great deal, if at all. These patterns seem not to be signifiers so much as optical patterning, a means of visual disruption more akin to World War I dazzle camouflage than the green and brown splotch patterns KixMiller employs here.

The question remains, though, of what all these interchangeable parts add up to. Each of these works is a sort of totem, a surrogate body composed of the materials and textures of the suburban built environment, stucco and Formica. The faces are hidden, disrupting audience identification with the photographed individuals, allowing them to be simply bodies without organs floating against a web-tile frame. There’s something slick to the work, a gloss that somehow positions it in the suburban strip mall, in the aisles of Wal-Mart or Home Depot.

It says, “We are you and you are we, even in our closest moments we are faceless, treading water.”